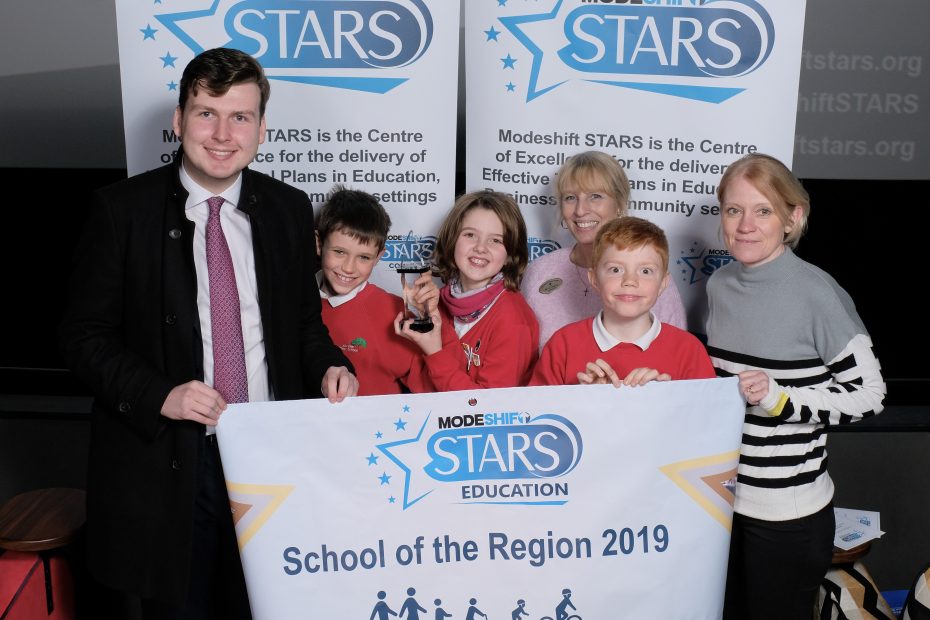 Despite their rural location Allendale Primary has a very proactive, ‘can do’ attitude to encouraging sustainable travel, with the Head Teacher fostering an inclusive attitude so all pupils can take part and  gain these valuable life skills, with pupils also getting involved in planning activities. This has resulted in a reduction in car use of 18% from 2015/16 to 2018/19 and an increase in walking of almost 39% and those using park and stride of 4%.  Those pupils with school transport provision are also encouraged to get involved by completing laps of the school field, active playtimes, walking further to meet the school bus or walking the dog before or after school.

1) Working with the LA, Local Councillor, AONB and  the Parish Council to improve road safety and access to the school, which had been identified as a top concern by parents. Traffic calming measures  have now been completed including,  speed humps, 20 MPH Zone, improved road markings and parking restrictions, as well as a new path to encourage use of Park and Stride. This has improved safety at the start and end of the school day and has encouraged more parents and pupils to scoot, walk and cycle to school.

2) Active Playtimes; pupils can bring bikes and scooters to school to use during playtimes, this is a simple idea but has had a dramatic effect and increased the numbers of pupils cycling and scooting to school during the summer term. Pupils led the initiative and persuaded the Headteacher that adding cycling and scooting alongside the other activities on offer at break times would be a good idea. They developed a set of rules and guidelines for safe practice and launched  the initiative during Bike Week. Over 50% of pupils cycled or scooted to school during the week, the school transport provider also assisted by allowing pupils to bring their bikes and  scooters on the minibuses, which meant everyone could take part. Increased levels of cycling and scooting has been sustained to the end of the summer term with many parents also taking the opportunity to cycle with their children.

3) Promoting inclusivity; Allendale Primary is a rural school and many pupils use school transport or the car. The school adapts initiatives to ensure everyone can take part in activities such as WOW and Bikeability and looks for opportunities to include walking as a regular part of the school day, pupils are also encouraged to bring bikes and scooters into school. This ensures pupils can put their skills into practice and makes active travel part of everyday school life  helping pupils develop these valuable life skills.

Allendale Primary School are committed to promoting active travel, delivering above what is required for their Gold Accreditation all with the greatest enthusiasm and making sure the whole school community is involved. The Head Teacher is a great ambassador and fantastic to work with and the whole school has taken a very proactive attitude, not letting the schools rural location be a barrier.

Allendale Town has a strong sense of community and the school has  built good relationships with the Parish Council and Local Councillor making them aware of this project and working with them successfully on a number of projects.

In 2018/19 the school decided to look at how they could promote cycling and scooting to school which can be difficult in a rural school. They introduced  Active Playtimes and encouraged pupils to ride their bikes or scooters to school and allowed them to use them at break and lunch times, the initiative promotes active, safe play, a cleaner environment around school and is also having a positive effect on pupils’ health and wellbeing as well as their confidence and road sense. Pupils have ownership of the project having developed the guidelines and rules, which gives them a sense of responsibility. Numbers of pupils cycling to school  increased  5 times during Bike Week, when the initiative was launched, and this continued through the summer term, with parents also getting involved and cycling to school.

Bikeability, the government’s national cycle training programme, is about so much more than teaching children how to cycle.

This website uses cookies to improve your experience while you navigate through the website. Out of these, the cookies that are categorized as necessary are stored on your browser as they are essential for the working of basic functionalities of the website. We also use third-party cookies that help us analyze and understand how you use this website. These cookies will be stored in your browser only with your consent. You also have the option to opt-out of these cookies. But opting out of some of these cookies may affect your browsing experience.
Necessary Always Enabled
Necessary cookies are absolutely essential for the website to function properly. This category only includes cookies that ensures basic functionalities and security features of the website. These cookies do not store any personal information.
Non-necessary
Any cookies that may not be particularly necessary for the website to function and is used specifically to collect user personal data via analytics, ads, other embedded contents are termed as non-necessary cookies. It is mandatory to procure user consent prior to running these cookies on your website.
SAVE & ACCEPT